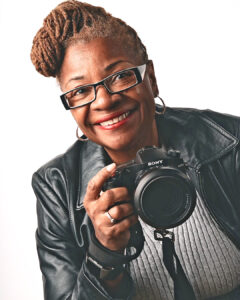 Salimah Ali is a contemporary photographer working in portraiture, documentary photography, and photo journalism, using her eyes as a voice to express her experience. As a young person, she moved with her family throughout the boroughs of New York City, from Harlem to the Gowanus Projects in Brooklyn and then to the “40 Projects” in South Jamaica Queens, before moving out at the age of 18.

Ali’s formalist training began with her father who was an oil painter. She pursued her passion for image at the Fashion Institute of Technology where she earned an A.A.S. in Photography. Since this time, Ali has gone on to an illustrious career, featuring work at institutions including The Studio Museum in Harlem, The Brooklyn Museum of Arts, Jamaica Arts Center for Arts and Learning, the Aperture Gallery, and the Schomburg Center for Research in Black Culture, which also holds Ali’s photographs in its permanent collection. Her photography has been published by Essence Magazine, Ms. Magazine, Black Enterprise, USA Today, Newsday, The New York Times, LA Times, Unique New York Magazine, and The Washington Post. She has also contributed to the publications Viewfinders: Black Women Photographers by Jeanne Moutoussamy-Ashe, Committed to the Image: Contemporary Black Photographers, Reflections in Black: A History of Black Photographers 1840 to the Present by Deborah Willis, The Face of Our Past: Images of Black Women from Colonial America to the Present, Timeless: Photographs by Kamoinge, and MFON: Women Photographers of the African Diaspora.

Since 2005, Ali has been a member of the Kamoinge Workshop, the longest-running collective of black photographers.